Most of us to take the existence and design of tow trucks in Dandenong, or wherever we happen to need them, for granted. We get in a bind, and they arrive promptly to help safely remove our vehicle that has fallen on hard times.  But just like every other complicated mechanical design, tow trucks have a few interesting facts under the hood, with a colourful history beginning over a century ago.

Read on to hear about where the humble tow truck originated, and how it forms the basis of all commercial tow trucks used today!

1. The tow trucks in Dandenong and nationwide all stem from a design made over 100 years ago.

2016 was the 100th year anniversary of the first tow truck ever constructed. It all started when a mechanic named Sr. Ernest Holmes of Chattanooga, Tennessee, found his friend in a bit of a pickle. Their car had rolled into a ditch and the only way of retrieving it at that time was good old fashioned elbow grease. After many laborious hours, six able-bodied men, a plethora of ropes and other instruments, the car was retrieved. Ernest soon realised, there had to be a more efficient way of retrieving these cars than pure muscle power.

He promptly began work on what ended up becoming the first-ever working tow truck and went on to expand into the first tow truck company.

2. The first-ever tow truck was a converted Cadillac! After a few attempts went awry, Ernest successfully secured is the first crane system onto the rear of his Cadillac. The hook system that Ernest created all the way back in the 1910s, is still largely what forms the basis of modern tow truck design!

A few years after his initial design, Ernest opened the world’s first towing company, Ernest Holmes Co. The towing services provided by Ernest and his family even weathered the great depression, due to his capability with budgeting and business know-how.

This company was passed down through Holmes generations until 1973, where it was then sold to a larger corporation. His family then founded another towing company which they eventually later sold.

3. There is an International Towing and Recovery Hall of Fame
and Museum in Ernest Holmes hometown of Chattanooga. 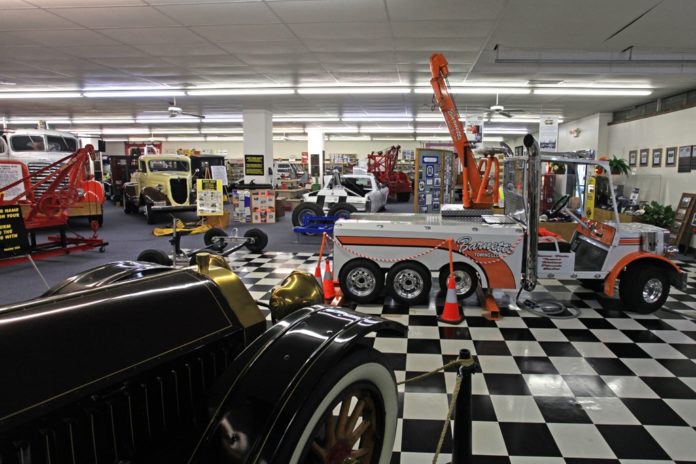 From tow trucks in Dandenong all the way to Tennessee, you can see the full history on display should you make a trip to the states. To honour Mr. Holmes and his ingenuity, a museum dedicated to the history of the tow truck industry exists in his hometown of Chattanooga, Tennessee.

At the museum, visitors can experience:

So when you think of the next time you need a tow truck in Dandenong or Melbourne, remember that without Mr Holmes in Chattanooga, Tennessee, who knows what may have happened!

4. Tow trucks have evolved into 5 designs, all stemming from Ernest’s ‘hook and chain’ machine.

Ernest’s initial design formed the basis of traditional tow trucks, which still to this day use the hook and chain system that he designed back in 1916 (with a few major innovations, of course).

These traditional vehicles are known as Boom tow trucks.

The boom tow truck is most commonly used in moving and transporting heavy vehicles. The hook and chain are used to elevate the vehicle.

Since the hook and chain design, four major tow truck innovations have emerged and are widely used in towing today. Boom tow trucks are the first, with the other three beings:

Flatbed or rollback trucks are vehicles fitted with a large flat surface. If you are in a serious accident or see a vehicle that is written off, you’ll notice more often than not that a flatbed truck is called to the scene.

These trucks are most commonly used for vehicles that can be easily towed using the rear-wheel drive. The truck elevates the front of the vehicle, towing it along behind.

This method of truck design is the best for the quick and efficient removal of vehicles. The trucks are specially designed that a hook isn’t required for safe vehicle elevation and removal.

5. The largest tow truck in the world can be found in Kelowna, Canada 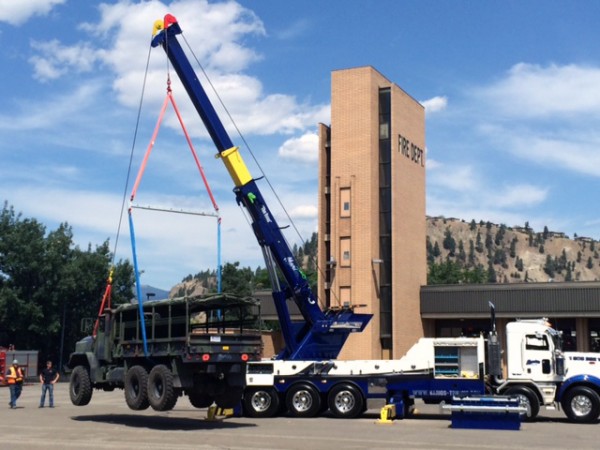 It’s not just regular old passenger vehicles that require a tow. Sometimes, you need a tow truck that has more muscle power than a normal vehicle can handle.

The biggest ever tow truck in the world can be found in Kelowna, Canada. It was purchased for the hefty sum of $1 million and originally made in the province of Quebec.  The truck has a mammoth 80-tonne boom and 60-k winch on the rear.

It took almost a week to navigate the massive tow truck across to British Columbia, where it gained national attention from passers-by wanting to take photos with the spectacle!

So there you have it – now you can impress your friends with your newly-minute expert knowledge of tow truck facts!

The tow truck industry is not one that immediately springs to mind as having a colourful and/or interesting history. We’re sure most of you have never given a second thought to where the tow truck design originated, how they have evolved, or who might have been behind it all.

So next time you find yourself in desperate need of a friendly tow truck driver or a tow truck in Dandenong, just remember that not that long ago, relying on able-bodied good Samaritans with ropes was your only real option!

Lion Towing is ready to offer 24×7 towing should you and your vehicle fall on unforeseen circumstances. Just give our friendly operators a call, or live chat us if you have any questions. One of our qualified tow truck drivers can be with you shortly to ensure that you and your vehicle make it out of an accident or breakdown safely.

Bradley Hudswell
2019-10-28T10:13:24+0000
Was stuck on the side of the road broken down, no other tow truck could get to me within the next 2 hours, called lion... towing was there in 20 minutes, reasonable pricing. Nice guy. Good experienceread more

Jario Cunningham
2019-06-03T10:01:41+0000
Absolutely one of the best towing companies I've been with, friendly and quick to answer the phone. dont worry if they... miss your call becuase they will call you back! They took the most care about my cars, From towing a Vn comoodore to a $30 thousdand dollar clubsport you get the same result witch is GREAT SERVICE ! They take in account things happen and are ready for any situation! The other week I got lion towing to tow my old vn commodore and this week unfortunately another one of my cars broke. 2 minute phone call and lion towing were straight on to it. 10/10 service. Very happy customer. :)read more

Andrew campbell
13:42 02 Aug 19
Lion Towing did an excellent job for me moving my heavily damaged car absolutely No problem at all. Thanks guys and... will definitely use them again in the future.read more

Jamil Salameh
00:43 24 Jul 19
Fast, Efficient and Cost Effective! Highly Recommend! Is always willing to go over and above to get the job done and to... assist when needed. Has great mechanical knowledge too so can get cars out of tricky spots. Always cautious and safe.read more

Ranil Fernando
01:08 22 Jul 19
One of the best support and services given from lion towing team when we are in trouble in the middle of nowhere. They... are very good responsive and responsible to work with and obviously fare price. Recommended 100%read more

Jeewaka Ekanayaka
11:10 21 Jul 19
Best Service Around. Using him for awhile and highly recommended. Keep up the good work mate ??

Elie Chakkour
07:57 21 Jul 19
Thanks lion towing for your prompt and professional service you provide for us. You always treat our cars and trucks... with care and provide us with a quality service in a timely matter we look foward to long and lasting relationship.read more

Pubudu de Silva
07:18 21 Jul 19
Have been using Lion towing for a long time. Never have let me down. And with the new tow truck they are punctual,... reliable and fare price too. Highly recommended!!!read more
Next Reviews
× How can I help you?